Some of you know. Some of you are there or have been there; life with boys. You will never hear so much non-stop noise in your life. While one is talking, two are arguing. Sometimes all three of them are just making random noises, either with their mouths or by using some other part of their body! They are dirty! Their feet always stink! They wrestle until someone is crying (and someone always ends up crying.) We have a running tab at the ER. They never hit the toilet and blame it on each other. And they have no earthly clue what a trash can or clothing hamper is for!

A few nights ago, the full moon was really taking its toll on our house. It was one of those nights where they were ALL jacked up and I was tired and cranky. At the announcement of bedtime, Sam says he is sleeping in the living room. I informed him he was not and then it started. The temper tantrum or as we southerners refer to it, a hissy fit. All of my children are stubborn but he is in a league of his own. He WILL outlast you if he so desires and no amount of spankings, reasoning or bribery will change his mind. His daddy took him to bed kicking and screaming and I laid down with him. And since he was crying so much, Jack gets back up because “he can’t sleep with all this noise”. I go along with this because I just want Sam to hush his mouth. He finally tones it down from full blown hissy fit to the “I’m tired but I’m going to cry for at least another hour just to get my point across” stage. Jack comes back in and lays down…playing a game on a tablet. Umm, no sir. He is fully aware that this is a major no, but doesn’t seem to care. After being asked to put it down several times, he continues to play…completely ignoring me!!! I take it away and then he starts crying!!! What is going on?!?

I laid in their room for what felt like forever waiting for them to give up and after being held hostage for over an hour, they finally gave up and passed out. After my escape, I walked out and saw this in the bathroom. 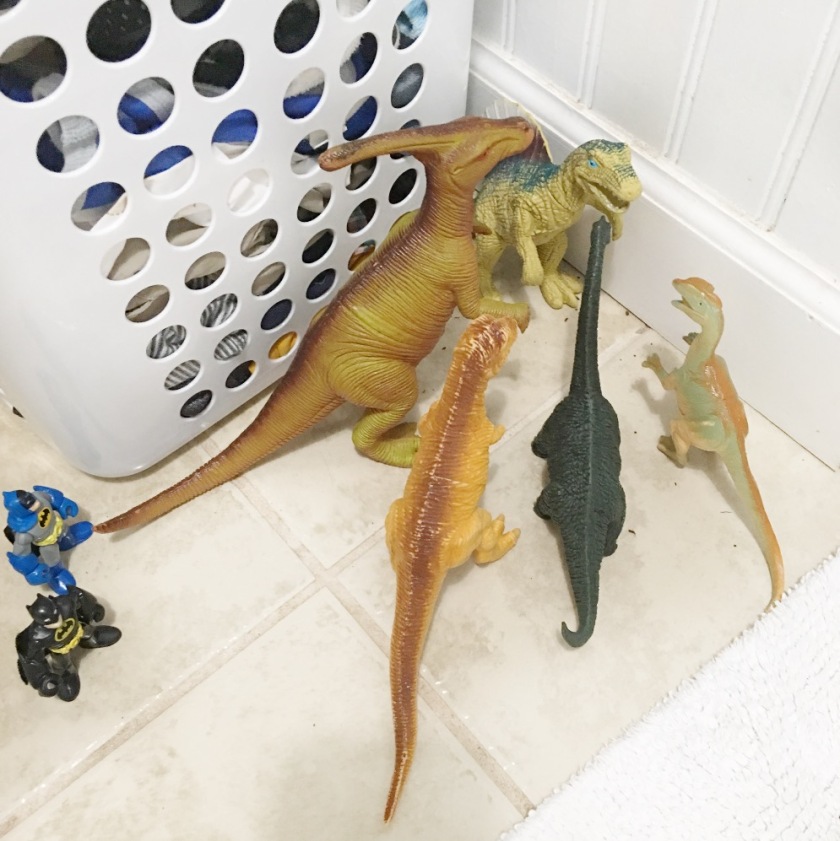 I know it’s just a circle of dinosaurs having a meeting in the bathroom with two Batmen, but it immediately melted my heart with its innocence and all of my stress was lifted. You see, that’s what life with little boys is like. They will take you to the brink of insanity. They will make you think you are going to lose your mind and then, just like that, they bring you right back in one simple, sweet moment.

That moment when you realize, that is your circus and those are your monkeys.